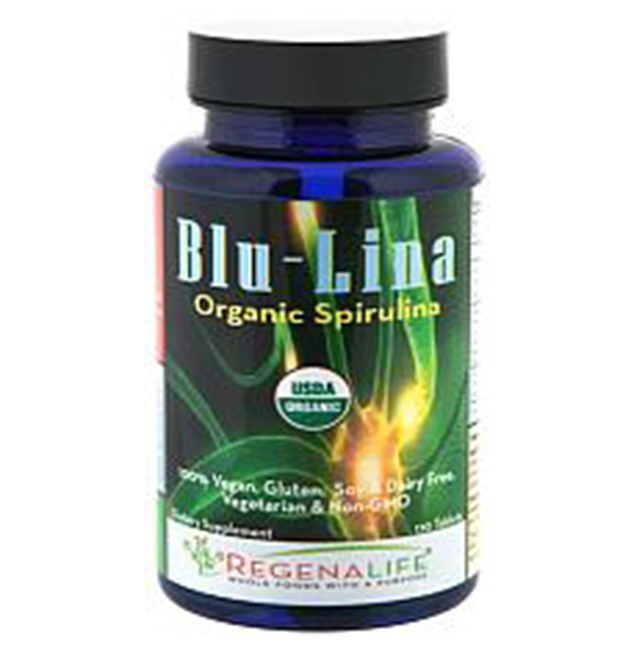 Spirulina is a great source of other nutrients including: vitamins B-1(thiamine), B-2 (riboflavin), B-3(nicotinamide), B-6 (pyridoxine), B-9 (folic acid), vitamin C, vitamin D, vitamin A and vitamin E. It is also a source of potassium, calcium, chromium, copper, iron, magnesium, manganese, phosphorus, selenium, sodium and zinc.

Blu-Lina Organic Spirulina by RegenaLife is a highly nutritious and easily digested algae water plant. Spirulina has been an important and rich food source for peoples of Africa and the America's for centuries. In modern times, it earned widespread popularity as a dietary supplement when NASA began including it in the space diet of astronauts.

Studies confirm that spirulina strengthens immunity; it improves the activity of white blood cells, stimulates antibodies and increases the population of natural killer cells. It is a potent anti-viral food.

Spirulina is high in chlorophyll, which builds healthy blood, resulting in better circulation. It may also prevent premature aging removing toxins from the blood and boosting the immune system.

Spirulina is a natural “algae” (cyanbacteria) powder that is incredibly high in protein and a good source of antioxidants, B-vitamins and other nutrients. When harvested correctly from non-contaminated ponds and bodies of water, it is one of the most potent nutrient sources available. It is largely made up of protein and essential amino acids, and is typically recommended to vegetarians for its high natural iron content. It is often touted for its high B-12 content, though there is a lot of debate about if this particular form is a complete and absorbable form of B-12 and I don’t recommend it completely in place of animal products.

Spirulina is a great source of other nutrients including: vitamins B-1(thiamine), B-2 (riboflavin), B-3(nicotinamide), B-6 (pyridoxine), B-9 (folic acid), vitamin C, vitamin D, vitamin A and vitamin E. It is also a source of potassium, calcium, chromium, copper, iron, magnesium, manganese, phosphorus, selenium, sodium and zinc. Spirulina contains many pigments which may be beneficial and bioavailable.

Spirulina was tested by an independent laboratory and found to have an ORAC (Oxygen Radical Absorbance Capacity) of over 24,000 which is 4x the ORAC score of blueberries. The ORAC score is generally used to measure antioxidant ability and concentration in different foods.

Spirulina is also incredibly high in calcium with over 26 times the calcium in milk, making it excellent for children, the elderly and during pregnancy.

Some research has suggested that Spirulina may be helpful for those with allergies and allergic reactions.

Spirulina’s phosphorus content makes it helpful as part of a tooth re-mineralization regimen.

Spirulina can bind with heavy metals in the body and help remove them.

Free of heavy metals, sodium benzoate, potassium chloride, or other artificial preservatives. No heat, acid, or chemicals used during processing.

Customers who bought this also bought: